Me and Tshepo Mazibuko parked outside the Universal Church of the Kingdom of God, located in Devland landfill in Soweto township. The church didn’t look impressive - just a flat roof with some chairs arranged in rows underneath it. But for the people living here at the landfill it has made a huge difference - before they used to eat mainly what they can find in the landfill, now they get food and drinking water from the church daily.

The waste picker settlement was teeming with activity. The first thing I noticed was cheerful music coming from several directions - many people had their own portable speakers. I wonder if South Africans bin more speakers than people in other countries? Another thing that caught my attention - some kids were running around with exposed bottoms, but absolutely all of them had shoes on. The ground is covered by a carpet of broken glass, so footwear is a priority here. As we walked deeper into the settlement, all I could see around me were makeshift homes interspersed with piles of recyclables and metal skeletons of mattresses functioning as fences.

The settlement went on and on in all directions, as far as the eye can see. Everyone was smiling, happy to see Tshepo, who has done a lot for this community. As they exchanged greetings, I asked what language they were speaking. “Sotho. Most people here are not from South Africa”, Tshepo explained. “There is a lot of stigma associated with these people, because they live here. But they are essential. Not only for meeting the recycling targets, but also for prolonging the life of the landfill, as they take a lot of materials out of it.”

“One of the problems here is the big amount of cash that passes through here, as all the buyers who come here to buy recyclables pay in cash. These people are not from South Africa, so they can’t have bank accounts. An innovation that has been tried recently is cash accounts associated with phone numbers. Everything works through SMS, no need for a smartphone. People get paid, then they can withdraw cash in Shoprite stores for 10 ZAR (0.63 USD) per withdrawal, or spend it in Shoprite without a fee. The people didn’t like the per withdrawal charge. Another innovation was brought here by big companies that regularly buy recyclables from these people - they offered bank cards to everyone. A card would not be linked to a fully fledged bank account, but would allow the holder to be paid via bank transfers and to withdraw cash from ATMs without a fee. Most people said they don’t know how to use ATMs (because they can’t read or write), and they are not interested in learning. The people also don’t like how digital solutions round the values to the nearest rand so they lose cents they worked hard for.”

While I was chatting to Tshepo, people walked past us carrying their portable speakers playing cheerful music. A couple walked past, hugging. One of them had a nice backpack. Another guy was carrying a big very much not flat screen TV. This abundance of stuff seemed really strange to my brain, given that this community has no access to electricity, sewers, drinking water or homes that don’t fall apart with the lightest wind.

I looked up to the top of the landfill towering in front of us; its top was decorated with rows of big bags of recyclables. “Let’s climb it!” I said enthusiastically. Tshepo had to admit he has never done that before, but he was up for a challenge. As I climbed, I passed a woman who sat down to eat an orange she found. Given how happy she looked, this must have been a lucky find.

As we reached the top, a view opened in front of us of heavy machinery and loads of people working fast. A large excavator swirled in front of me, but as I tried to get out of it’s way, for a second I thought the driver was actively trying to drive me over. His window was lowered and he started shouting at me. “He wants you to take a photo of him”, Tshepo explained. I did, but he continued shouting as he opened the door of the excavator. “He is saying that the door was blocking the view, you can’t see him whole in the photo, only the face.” I took another photo, this time to the driver’s satisfaction. Tshepo explained that the only white people the locals have ever seen were all journalists.

A sudden wave of excitement was almost tangible in the air. The source of it - a big garbage truck tipping out waste fruit and vegetables. Everyone started running towards it. They were sinking in the fresh not yet compressed waste, falling over, but getting up quickly to continue running.

We continued walking towards the far side of the landfill. “People from Lesotho here, and from Zimbabwe over there”, Tshepo gestured towards the far away area. I guess it makes sense that people form communities based on a shared language; it’s not a multicultural utopia where everyone collaborates with everyone.

It was time to climb back down. The slope of the slippery waste was very steep. I was hoping I wouldn’t fall and get myself covered in decomposing matter and baby nappies. I don’t mind getting dirty, but I was worried about Tshepo’s car, as I was dependent on it to get out of here. I couldn’t figure out how people here master this slope while carrying on their heads huge heavy bags loaded with recyclables. My original plan was to offer my help and be useful by carrying something down, but given how bad I was doing I had to scrap that plan.

A couple of women behind me started shouting. “They want you to take a photo of them”, Tshepo explained. Barely balancing on the slippery slope, I did and I rushed to put my phone back into the pocket before I slip. They continued shouting. “You have to do it again, they weren’t waving that time.” I took another photo.

As we reached the level ground at the bottom, I felt relieved, even though it was a carpet of broken glass. Tshepo was relieved too that both of us managed not to fall; the conversation started flowing again. “When people came here to tell them about the coronavirus, their reply was ‘we have bigger problems’. These people are used to living with disease. During the lockdowns everything here was just the same. Trucks bringing in waste, people collecting recyclables. The only difference - no buyers came, so they got no income at all for a long time. They don’t have IDs, so no government help could reach them. It was difficult. In a couple of years this landfill will close, it’s almost at its maximum capacity. People here know this, but they don’t know what is going to happen to them.”

As we drove off, we stopped at a big multi-lane junction where two traffic marshals were managing the hectic flow of cars. It’s not that the traffic lights were not working, there were no traffic lights at all. I asked Tshepo about it, “They’ve been stolen, that happens often” he replied. “It’s not the poor people who do it, it’s organised crime. Poor people don’t have cordless power tools required for the job. This street used to be lined with large trash cans, they have been stolen too. Here everything that is recyclable gets recycled!”

Tshepo dropped me off and I caught an Uber to get back home. As soon as I got into the car, the driver said he had no gas and asked for my permission to drive to the gas station first. “Sure. We can’t go far without the gas, right?” 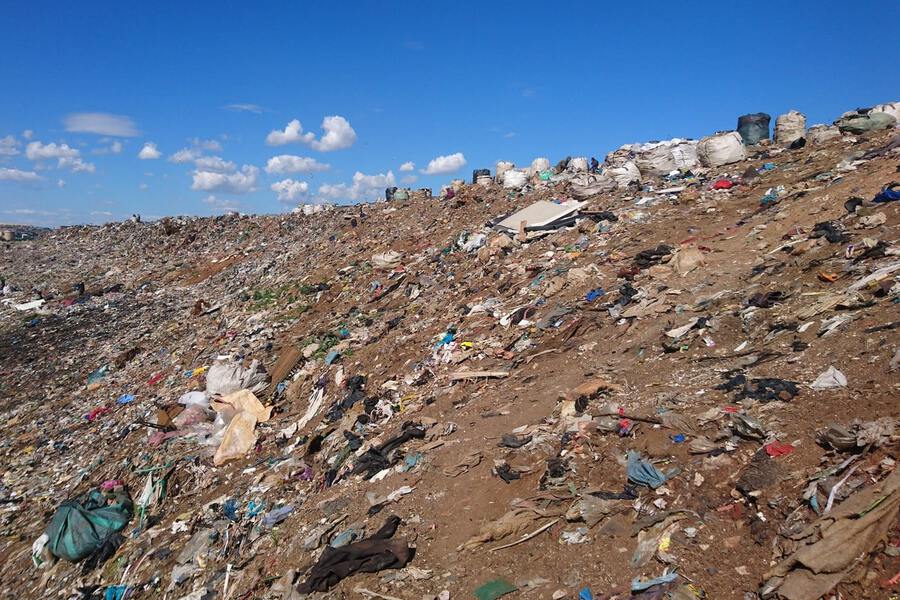 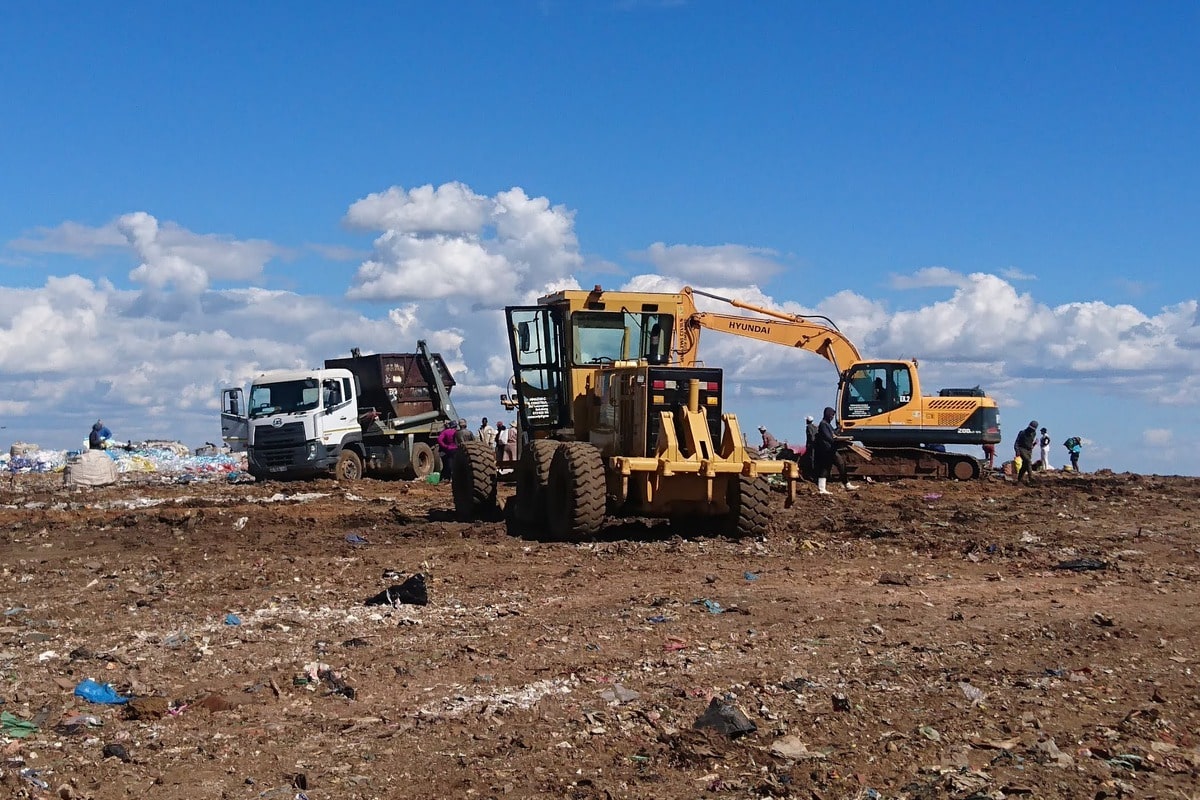 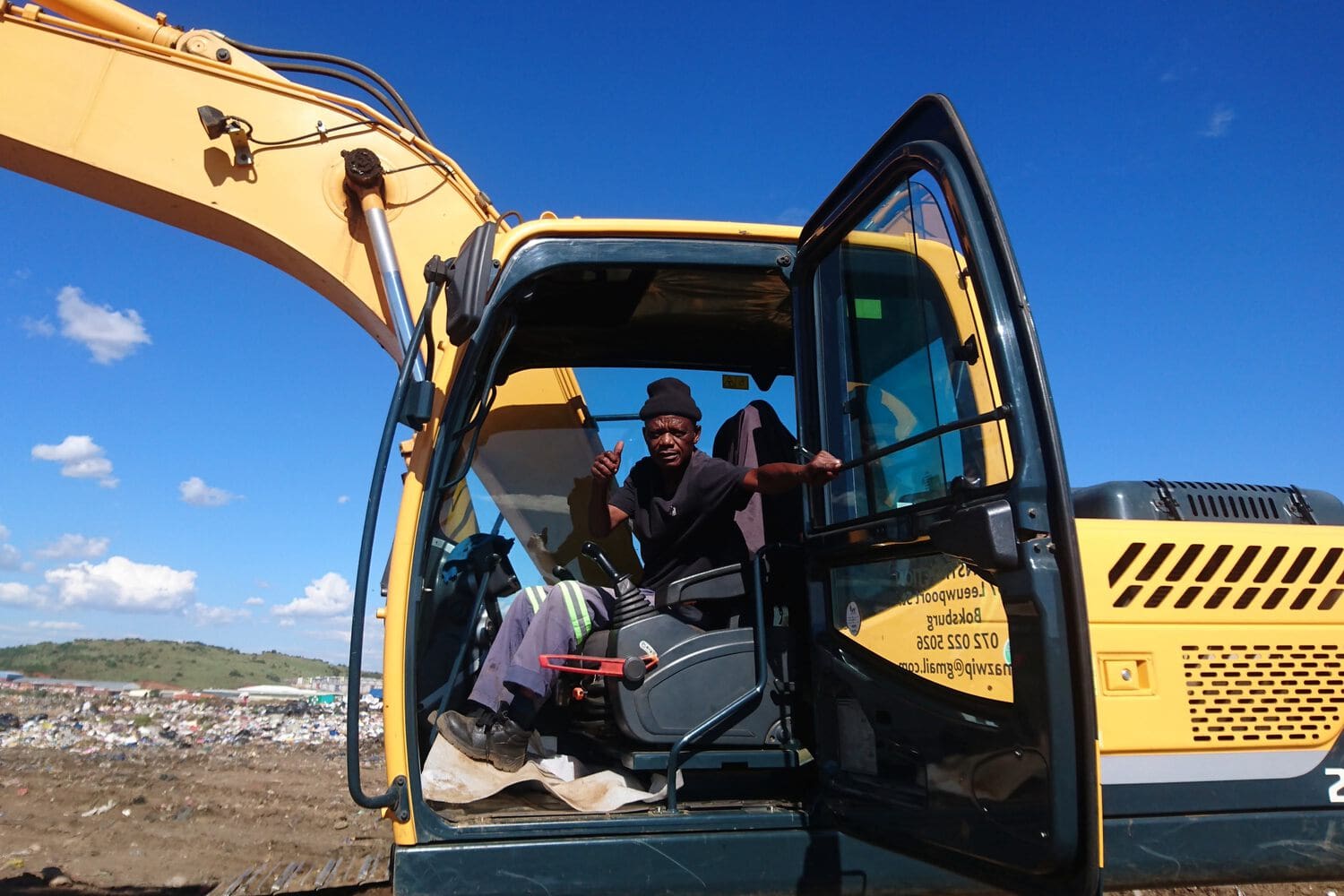 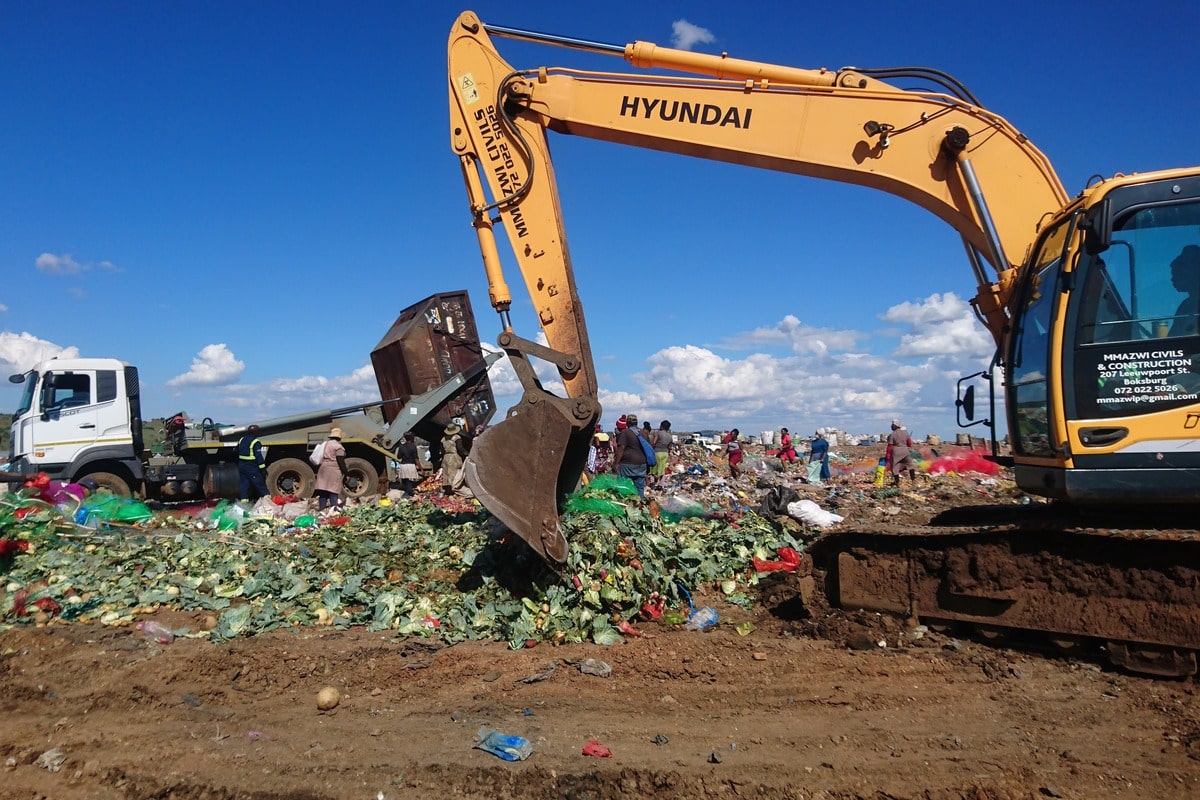 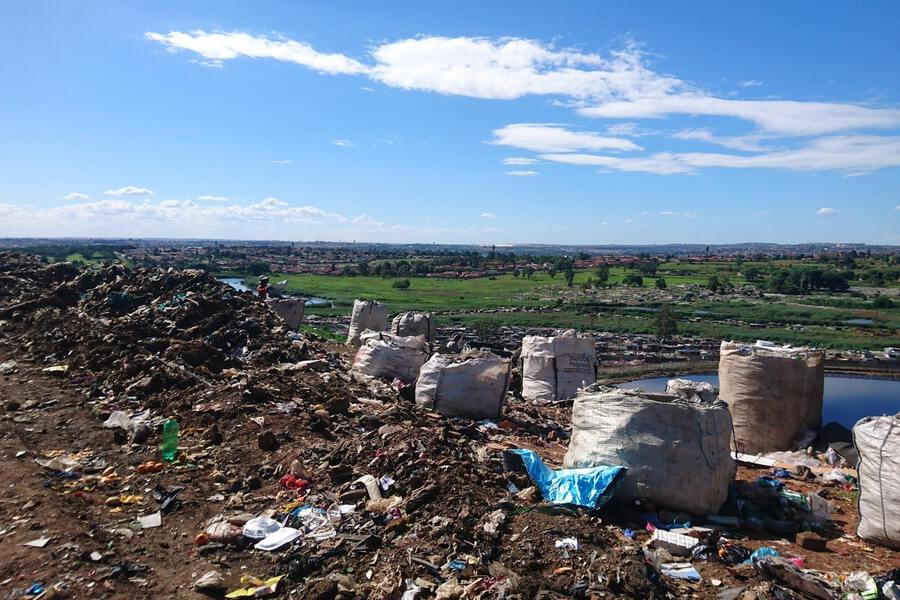 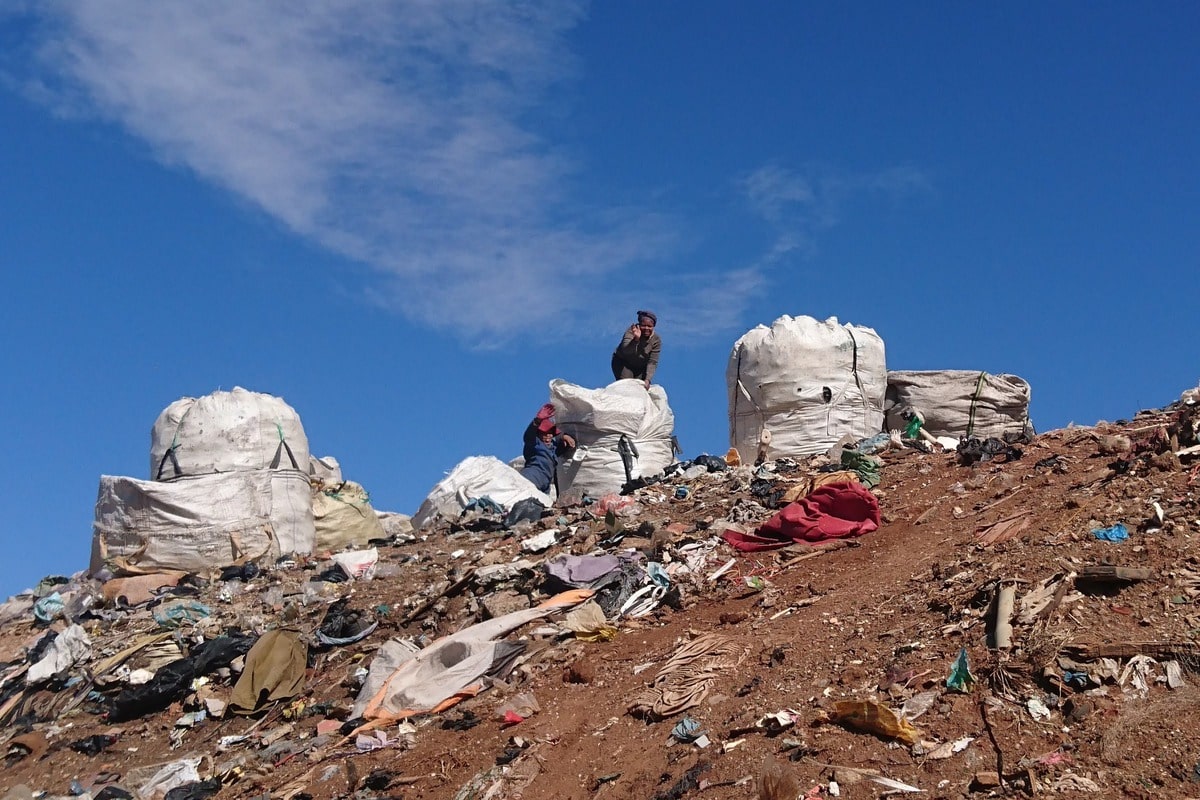